The following blog— an online journal—includes an interesting account of how one SARD dog reacted to a more natural diet. The last entry is September 2nd, 2006. I followed up with the owner who informed me that her dog was doing well with hormone replacement therapy. His weight was 79.4 pounds on October 1st. Their goal is 75 pounds. There was a technical problem that prevented her from continuing to post her blog. 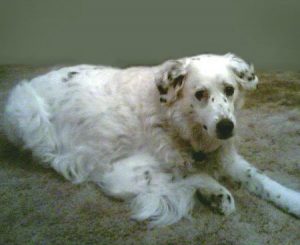 Sandler went blind in August 2005, since then we have been on a search to learn more about his condition SARDS and dealing with the everyday ups and downs of living with his blindness. There are so many helpful sites and people that give their time, knowledge, and support over the net. His condition affected me a lot worse than it did him and I am so lucky to still have my baby healthy and with me for hopefully many more years.

I will eventually get the “rest of the story” up about Sandler, but for now, I need to just keep track of our daily events as we start our treatment journey.

This morning: he woke up very happy- dog smiling, wagging tail, not seeming depressed at all compared to yesterday or the previous couple weeks. I am wondering if the change in diet is working already or if it’s just coincidental or in my head lol.

Did not pee anywhere in house last night

Went to see Dr. Seely and he is running a Superchem to make sure there hasn’t been any liver or kidney damage, I will find out results Monday. If all is good, hopefully we can get the other hormone testing off to California and start treatment.

Exteremely difficult to control and guide on leash today. I bought a 6′ to see if it will work a little better until he gets more clarity back, he wasn’t too happy, loves his retractable.

Ran into the door of the van, nicked his eyelid had to get a topical from Dr. Seely to use 2x daily until healed. UGHHHH. Trithalmic Ophthalmic Ointment

Was a very sweet boy w/no problems getting temp taken and blood drawn as always.
Came home, drank a lot of h2o, sleeping by front door.

My mood and feelings: very hopeful that all will come out good with his Superchem and we can get started. Caroline Levin believes that after a couple weeks of treatment, he will start to have more clarity and not be as disoriented. I am really excited for this but still have that small amount of fear and doubt. I’m sure that’s normal. I am starting to consider if this works, I will adopt a Lab or Golden Retriever from one of the rescues that is 3 or 4 to get him a companion to help with exercise and ultimately help to navigate him around.

Came home from catering, wagging tail and smiling, let outside did fine in front yard on chain (why he wants to go out front all the time when he’s got a fenced in back yard is beyond me!) let back in house, running into everything but still seems happy and ok.

This morning, he woke up ok, not as happy as yesterday, but not depressed either.
No accidents again, 2 nights in a row yeah!!!

Was docile and alright all morning. When I put my uniform on to go into work, he went to pout in my room as he always does. I went in to say goodbye and give him a piece of cheese for his goodbye treat and he had jumped on the bed and was on top of all the pillows like he usually does except he hasn’t jumped on anything by himself for about 3 weeks or so. So I said my goodbyes and went to work all happy for another little breakthrough.

Came home from work, on the bed again! I could tell he had been up and about during the day because he had found a hidden rawhide and put it on the chair in the kitchen and his water bowl was down, so at least 2x in one day, had gotten up by himself without a problem. No visible injuries anyway.

He decided he was going for a walk and started spinning by the front door, thought he was going to break another tooth he was so crazy. Went for a walk on the new leash, he does not like that thing. Thought we were both going to die he was all over the place running into me and almost knocking me down a couple times, so I just walked him on the pavement instead of the sidewalk really quickly to wear him out a little and it seemed to work at a quicker pace to get him to go somewhat straight.
Started the day off a little down but ended up great, he wolfed down his dinner and has been rolling around on the floor scratching his back and acting really happy.

Over the weekend he stayed about the same, not lying around as depressed, seems that it is indeed the diet making him feel better. Still not able to manuever himself around. but has been pretty happy off and on. Hasn’t jumped on the bed at all since the other day. Dr. Seely called yesterday and got his test results back and is calling Levin with a few questions. I am hoping we can get started on the hormone therapy as soon as possible. Just takes forever sometimes it seems

The diet is going fine, he loves it but misses his rawhides. Terrible breath without his treats.
Shedding really bad

Sandler has had his ups and downs the past week. He is still doing well with the new diet and loving it. He won’t eat bananas or squash but seems to devour everything else-eggs, steak, stewmeat of any kind, carrots, green beans, cottage cheese, applesauce, etc. His moods have gone back and forth, I’ll have him 100% Sandler for a couple days, then he’s pouty and depressed again. We are still having difficulty walking on a leash and he’s still very disoriented bumping into things and getting startled.

Dr. Seely got the superchem back and said things were good and spoke w/ C. Levin about her work and was supposed to have contacted the lab in CA today to set things up for the hormone panels testing, but I haven’t heard back from him. Could be he wasn’t able to get through to them or was busy and not able to contact me. Just getting frustrated waiting. I am putting so much faith in the hormone theraoy working that I want it to start tommorrow. I guess we have made it thus far and I need to have patience. I’m just so afraid that with him being so disoriented and lost he’s going to hurt himself and I just can’t think about that.

On the positive end, he’s been jumping on the bed and waking up almost every day a happy boy, no accidents now for almost 2 weeks, and the gas is gone Thank GOD!!! He still wants to go out in the front yard and hang out, walk, go for rides and walks and gets very excited when I even mention doing any of this. I an anxious to see what his weight is, since he’s been off dog food and treats for a couple weeks, he seems a bit smaller but it could be just like going on Atkins for people, the bloat goes down so quickly with the absence of grains.

Dr. Seely finally got the lab to respond and we’re going in Tuesday morning to get his blood, fecal, etc samples to get started. Finally some of this tension can go away. All and all, he’s still doing a lot better during this waiting process. He’s still disoriented but not as bad. I am sure now that he has lost more weight we’ll find out Tuesday how much. He’s still running into things but not with the same full force as before. Listening a little better when given a warning to be careful or slow down. No accidents for weeks now. He did however puke all over my bed the other day. I checked him all over-gums, stomach, butt, etc. and he was just smiling and wagging his tail like nothing was wrong. So who knows what brought that on. I guess the good thing out of that is that he’s still jumping up on the bed and feeling more confident. I can’t get him to get up on the couch or bed with me but he has been doing it when I get ready to go to work when he puts on pout mode. Not shedding as bad. Breath is better, gas seems to be gone. Every time I get him brushed and trimmed, he has a bout with diarrhea and has it hanging off his tail and butt which is my favorite to clean up ughhhhhhhhhh. Really, we have had a good week, he’s been very up and happy and that’s my biggest relief. Me, I’m still worried but feeling more at ease.

July 8 91 pounds, August 31 82 pounds YEAHHHH!!! Got the blood sent off on Thursday so we’ll see what happens. Sandler’s still doing good, no set backs. He’s up to his old tricks so I’ m happy. We were at the dog park the other day and he spent 20 minutes in the pond just standing there to antagonize me. He has decided that carrots need to be hidden under the pillows on my bed for later and that he can now go bye bye any time he chooses. Sounds crazy, it’s the little annoyances that make my day.