This dog was extremely responsive to dietary therapy. It is difficult to know how to comment on the diagnosis of progressive retinal atrophy (PRA) in this case. There are occasionally reports in which practitioners have difficulty distinguishing between PRA and SARDS. Perhaps this was one. The events below suggest that removing suspected dietary irritants returned hormone activity to normal and the retina was spared. Again, this dog was extremely responsive. 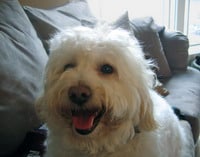 Our dog Spike began to show the symptoms of Cushing’s disease late last fall. The subsequent tests were negative, but the symptoms increased and persisted. In February of this year, he lost his sight. Our canine ophthalmologist veterinarian diagnosed Peripheral Retinal Atrophy and referred us to your book for dealing with a blind dog. As an R.N. myself, I could not help but think there was a correlation between the Cushing’s symptoms and the blindness, so I ordered your book on disease and nutrition. Simultaneously, the dog food recall occurred and our very expensive dog food was on the list. After reading your books, doing my own research and informing my veterinarian, I took my dog off of all commercial dog food and prepared him a gluten free diet. He eats meat, vegetables, fruit, non-fat plain yogurt, eggs, and cheese. He was much happier eating this diet vs. the very small amount of commercial food he was permitted.

Within a month, he was happier, more energetic, had less thirst, less urination. less panting and lost weight. One day, my family said that they believed our dog had regained his sight. I was skeptical based on his diagnosis. The vet explained his vision loss was permanent and he would be completely blind. So, when I started him on a new diet, I never expected that his eyesight would improve. I had accepted he was blind and was following the guidelines in your book for dealing with a blind dog.

However, he HAS regained his sight and is back to the dog we adopted 2 years ago! His pupils are reactive again. He blinks when you point your finger toward the center of his pupil, which wasn’t the case before. He sees great distances to chase our cat or squirrels! This weekend, we went to our cabin and hiked. He had always hiked off-leash until he went blind. The last time we were there in the spring, he couldn’t see the edge of our dock and actually fell 1 1/2 feet! Well, this weekend, he was again hiking off leash, navigating tree branches. holes, and rocks just as before. It was wonderful seeing him back to his prior self.

I firmly believe that your information saved my dog’s life. I want to thank you so much for the work you do and how you have helped us and our beloved dog.