What’s in a Name?

Some people take issue with the way I describe the underlying hormone problem in SARD dogs. In this article I’m going to tell you why I use the phrase adrenal exhaustion.

Here is a graphic representation of adrenal exhaustion. Bold text indicates areas of excess activity. Small text indicates an area of insufficient activity. Please note that all the charts on this page depict the same hormone problem. The charts differ only by the lab test, that is, which hormones a veterinarian measures. 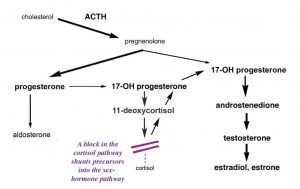 In human healthcare there’s a condition that has some similarities to the symptoms SARD dogs suffer — fatigue, lethargy, depression, insomnia, weight gain, etc. Patients are typically middle-aged females. It was dubbed Chronic Fatigue Syndrome (CFS) in the 1980s. It has a neurological component. It has an endocrine component. And nowadays patients are treated with low-dose cortisol and thyroid hormone.

When I first began writing, I could have used this to illustrate and explain the adrenal dysfunction in SARD dogs. However, the allopathic medical community was quick to dismiss this term and these patients. Doctors told patients the problems were all in their head. They called it “a new-age illness.” They prescribed psychiatric and anti-anxiety medications. So, I couldn’t use this as a teaching tool. Your veterinarian would have scoffed at it just as MDs did in the 1980s.

We see another condition in humans that shares similarities with SARD dogs called Congenital Adrenal Hyperplasia (CAH). Specifically, it’s a version called “Adult-onset CAH due to 11-beta hydroxylase type 1”. In this condition the adrenal glands become enlarged as they fail to produce cortisol. The result is a rise in adrenal sex hormones just as we see in SARD dogs. Management consists of low-dose cortisol replacement.

As the name implies, CAH is a congenital disease and is often apparent at birth, but not always. In many cases it does not appear until later in life . I might have used CAH terminology to illustrate and explain adrenal dysfunction in SARD dogs. But veterinarians said, “CAH is congenital. These dogs were not born with SARD!” And the discussion was ended.

In the field of veterinary medicine, a general practice vet named Alfred Plechner pioneered the use of low-dose cortisol in animals without a standard Addison’s diagnosis. He developed a laboratory test that assayed cortisol and total estrogen. He dubbed the scenario of low cortisol plus elevated adrenal estrogen Plechner’s syndrome. 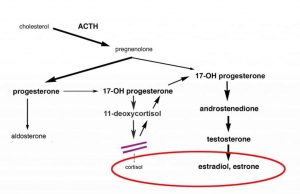 I might have used this terminology to describe the adrenal dysfunction in SARD dogs, but veterinarians were quick to reject it. The treatment included aggressive cortisol replacement which was objectionable to most. Concerted efforts by the mainstream veterinary community resulted in a smear campaign against Dr. Plechner. 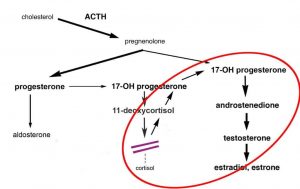 To this day, endocrinologists at the University of Tennessee’s College of Veterinary Medicine do not supplement the cortisol in these dogs. Instead, they recommend therapies that further disrupt adrenal function. General practice veterinarians dutifully follow these recommendations. If I had used this terminology to describe the adrenal problem in SARD dogs, dogs would have received cortisol-reducing therapies rather than cortisol-replacing therapies. 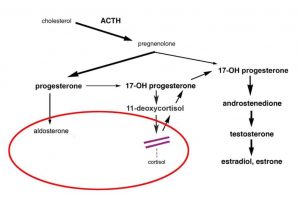 Atypical Addison’s might be a good description of the adrenal problem that SARD dogs experience. In my opinion, it is more accurate than “atypical Cushing’s”. However, the veterinary establishment was quick to dismiss this phrase, claiming, “there is no such thing.” So, once again, the terminology was not entirely useful in securing treatment for these dogs.

With veterinarians at such odds with each other, I returned to research done in human medicine. Hans Selye MD, famed author and the “father of endocrinology” detailed various phases of adrenal gland activity in his book, “The Stress of Life” (1956). In the phase called adrenal exhaustion, he described a failure of cortisol production. This phrase carried with it the least baggage, was instructive, and offered the best chance for securing a dog’s treatment.

In my 15 years of describing this condition in SARD dogs my understanding has evolved. I now (2020) question whether the adrenal gland experiences a period of overdrive. I now suspect that failing cortisol production manifests itself from a mild, genetic failure of enzyme production.

I hope you now understand how I came to use this phrase. I also hope you understand that institutional, mainstream medicine periodically promotes a false narrative.

If the phrase I’ve chosen still bothers you, simply refer to the problem in its simplest form. Call it “elevations-in-adrenal-sex-hormones-resulting-from-insufficient-cortisol-production.” That would do it.

I wish you and your dog all the best,
Caroline