Last week a general practice veterinarian asked me the following question. “Why is the daily replacement level dose of cortisol higher for SARD dogs than the physiological dose for Addison’s dogs?” This is a good question but I doubt it’s of interest to the average dog owner. Therefore, my comments are directed to the prescribing veterinarian.

Because the adrenal gland is the primary producer of glucocorticoids, less attention has been paid to steroidogenesis in peripheral tissues. A wide range of peripheral tissues are reported to synthesize cortisol in humans and rodents. Mucosal, pulmonary, cardiovascular, epidermal and central nervous system tissue demonstrate local glucocorticoid production. While these levels have not been quantified, they are described in the literature as important sources of glucocorticoid synthesis.

The adrenal pathophysiology in Addison’s disease

Autoantibodies to steroid 21-hydroxylase are characteristic of autoimmune Addison’s disease. Autoantibodies are specific to the adrenal gland unless a poly-glandular syndrome exists. In that case, antibodies may also target organs such as the thyroid, pancreas, or gonads. Celiac disease has been reported in poly-glandular syndrome. I can find no reports, however, describing peripheral tissue such as lung, cardiovascular, epidermal or other mucosa as autoimmune targets. Cortisol production in peripheral tissue may remain intact.

The adrenal pathophysiology in SARD-affected dogs

In comparison, the adrenal dysfunction in SARD-affected dogs is similar to late-onset CAH due to 11-beta hydroxylase type 1 (11-BHD1) in humans. This genetic mutation results in a failure to produce 11-BHD1— the enzyme that reduces deoxycortisol to cortisol. It’s possible that unlike Addison’s disease which specifically targets adrenal tissue, the loss of 11-BHD1 affects systemic cortisol production including that of peripheral tissue.

Today a practitioner brought up another relevant question. She asked me why we don’t see elevated adrenal sex-hormones in Addison’s cases.  My reply was this. In adrenal exhaustion the pathophysiology is confined to the 11-BHD1 enzyme. Production of deoxycortisol remains and a functioning sex hormone pathway still exists. 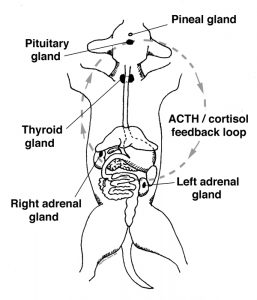