The following letters are from the owner of an eleven-year-old Australian Shepherd-mix. These reports start about two weeks after the SARD protocol was initiated (hormone replacement and retinal protective therapies). The general practice veterinarian also dispensed a short course of azathioprine. I’m unclear as to how much effect this may have had. We do know that Morgan is the fifth dog to regain functional vision following hormone replacement/retinal protective therapies (see CaseReport10.pdf).

Table 2. Endocrine & Immune panel results before and after 6 weeks of treatment: 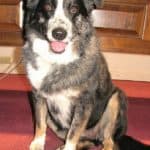 Morgan navigates my English garden and the neighborhood successfully. It is a different path every day and he is not crashing into things. We do this three or four times a day plus he navigates through a warehouse at work. He is still very blind but he uses his nose like a cane…sensing left and right. It is noticeably worse at night…so I suspect “shadow vision”…in bright and normal light he does way better. He is set for a check up at the vet’s tomorrow.

Morgan went in for an exam. He now has some retinal function…made it through a small obstacle course. He is blind but not as blind. Developing.

Morgan seems to be doing fine. He is running, exploring, hunting, playing and letting himself out the front door of my store (just like old times). I have a set of commercial metal-framed glass doors at the storefront. He puts his head on the door and pushes. So does my Aussie. When they need to relieve themselves, they go out to that place…a dirt area and go, then they return and stand in front of the doors in order to be let in. Morgan walks through the store, past many displays, around corners etc. and back into my office and then lays down on his padded lambswool bed. It is really hard to believe that he is blind. It is a circuitous route.

A squirrel popped out of a culvert under the entrance to my property…he either spotted it or heard it or smelled it…ran across the property..started digging and had his head in the pipe….it was something to see…the Morgan of old. He is currently trying to convince me to let him out of the office so he can get that squirrel!

Today I was standing by the SUV with the door open in the rear of the driveway. I made no sound. Morgan headed for the car…at a run…right to the center of the door and jumped in hitting nothing. The dog sees something. He amazes everybody. I think it is a combination of acclimation, smell, and some sight.

Here are some videos of Morgan greeting a farmer in my store. If he were blind, he would have walked into him..he used to. Watch Morgan react to him and then follow him out a door. There is no question as to his sight. In darkness or dusk it is not as good BUT sometimes he does as well in those conditions. He has some days better then others but they are now pretty stable. He bumps into nothing.

I am pouring the Sardines to him as well as everything else. The dog just loves the diet (liver, beef, lamb, chicken, cooked veggies, fruits, supplements, meds). When its mealtime he stands on his hind legs in excitement. Actually…the veggie/fruit steamed dish I prepare and keep in the fridge tastes pretty good.

Morgan is better now then in the videos. I have tested him with treats in my hands…moving my hands up, down around. I used to have to tap him on the nose to tell him there was a treat (freeze dried liver). No more. He SEES the treats and reaches for them. I have seen a definite improvement in the last week. He has regained more sight!!!!!!!!!!!!!! He has more then “shadow vision”, although hardly perfect, I truly believe he would be considered “sighted” at this point. I believe that I am witnessing a miracle.

Although I have no medical background other then being an Army Corpsman, I think the hard “bang” with the Pred had a lot to do with this — however — it is not for the faint-hearted owner. The dog was goofy, had not the strength to lift his leg, peed in my SUV and anywhere else. Only the truly committed owner can do this. But the result is that the dog is not blind any longer. He may well be the best example of SARDS recovery as yet.

Dr. Ponder is sourcing Pred or Medrol in the small maintenance dose. Morgan is continuing to improve daily. His night vision, which was deficient, has improved to close to that of day vision. I would guess him to be at 70-80% of normal. Sometimes he is a little slow at following hand cues but most of the time pretty quick. He almost caught a rabbit this morning.

Note: To date, over 20% of SARD dogs have regained some degree of functional vision when treated for adrenal exhaustion and protective retinal therapies. Please have your SARD dog tested and treated promptly. This treatment protocol is available in “Living with Blind Dogs” or via email.